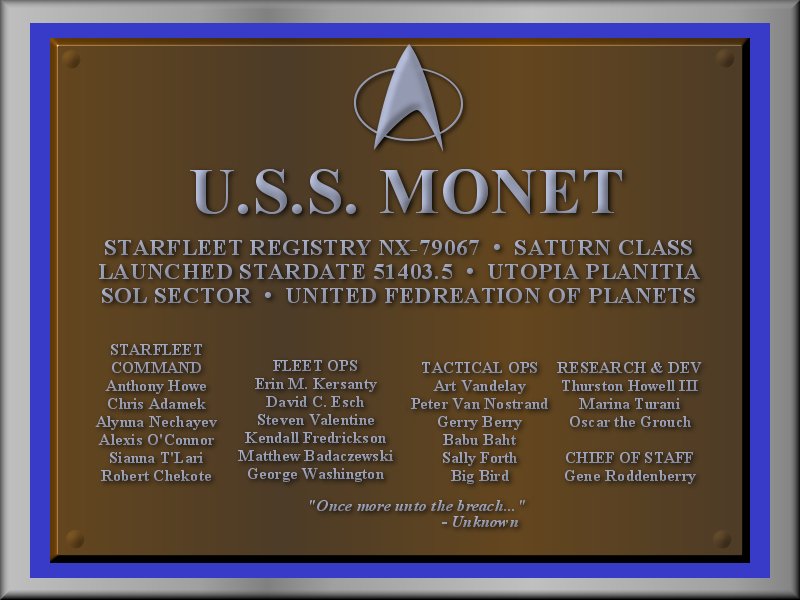 The USS Monet was launched in 2374, under the command of Captain Paul Shearer. The Monet is the first and only of the new Saturn class warship. The Saturn project was started in 2370 after the Defender class project failed (See Maiden Voyage Part 2). The Monet has the same basic design as the Defender class, but was designed smaller and quicker. The Monet was first designated the USS Dreadnought but under an agreement with it’s new Captain, Paul Shearer, the name was changed to the USS Monet. The Monet is built mainly to fight, and was finished two months before schedule after Starfleet decided to speed up the work due to increased tensions between the Federation and the Dominion. The Monet is the most powerful ship in the fleet, next to the Sovereign class and has many weapons, defenses and unique features. One of these unique features is a cloaking device. The Romulans agreed to allow Starfleet to fit the Monet with a cloaking device, under the agreement it will never be used against anyone but the Dominion. Another unique feature is that the Monet is able to detect cloaked ships using a special Tachyon sweep, but this requires an enormous amount of power and is rarely used. The Monet is assigned to the sixth fleet, which is under the command of Fleet Admiral Foster.

This is an example widget to show how the Right Sidebar looks by default. You can add custom widgets from the widgets screen in the admin. If custom widgets are added then this will be replaced by those widgets.